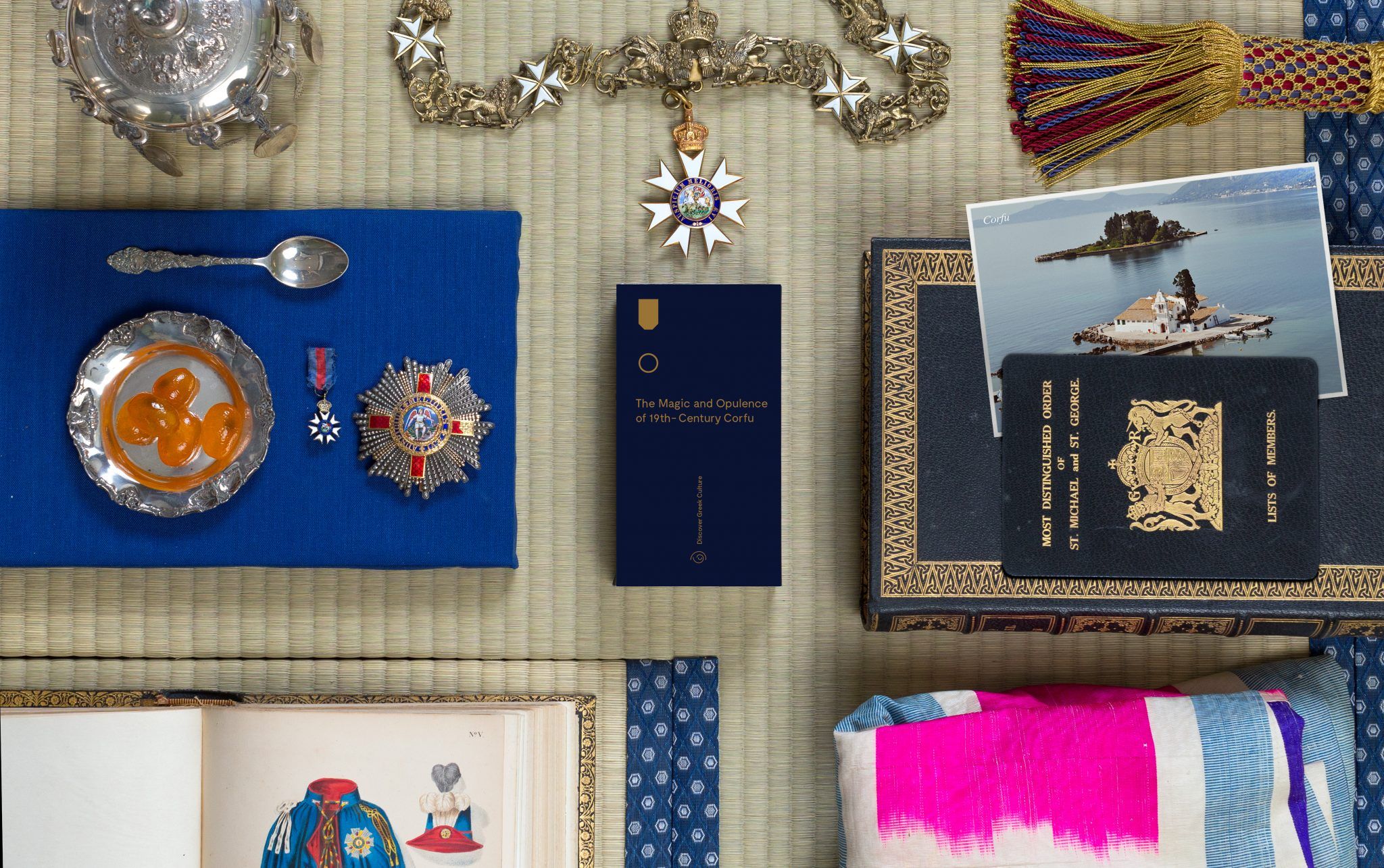 Corfu, or Kerkyra as it is known in Greek, has been one of the most coveted islands in the Mediterranean for millennia. Empires and kingdoms—from the ancient Corinthians to the Romans and from the Byzantine Empire to the Venetians, French and British—have fought battles to lay their claim to its stunning verdant landscapes and sparkling blue seas. And for centuries, Corfu has also been a favorite destination for royals and aristocrats, who built their summer palaces on the island’s lush hills to enjoy the Greek sun and the glorious Ionian Sea.

With its roots in the 8th century BCE, the Old Town of Corfu is a UNESCO recognized world heritage site, internationally renowned for its cultural significance and the numerous monuments that line its streets. Explore its two forts, which stand magnificently over the Old Town—the Old Citadel, which in its earliest incarnation has stood on the site since 6th century CE, and the New Fortress, which was built in the 16th century—and visit the Campiello, the Old Town’s oldest district, to wander the narrow alleyways and small plazas and let its enchanting atmosphere transport you through time.

Dedicated to showcasing the inimitable charm of Corfu’s Old Town, Discover Greek Culture offers private tours that introduce you to Corfu’s Venetian heritage, its internationally renowned historic center and a number of key attractions—hands down the best way to experience Corfu’s Old Town. And because no experience is complete without a little indulgence, we also offer options to sample local treats and enjoy a wine tasting session at a one of the island’s best wineries.

Corfu has long been a favorite destination with some of Europe’s most demanding travelers. From the First French Empire to Empress Elisabeth of Austria, Prince Philip Duke of Edinburgh, and the Greek Royal Family—and countless lords, ladies, dignitaries and acclaimed artists in between—Europe’s most influential forces and figures have been drawn to Corfu for centuries. Royals and aristocrats have holidayed here, basking in the island’s magical atmosphere and, in turn, imbuing it with an air of finesse and sophistication.

Discover the magic and opulence of 19th century Corfu with a private guided tour of some of the island’s most splendid sights. Experience that era’s almost fairy-tale world as you visit a royal villa, explore a palace, and discover exquisite art collections in the heart of cosmopolitan Corfu. Discover Greek Culture also offers exclusive access to private locations and artifacts: a remarkable opportunity to not only experience history but also hold it in your hands.

Natural beauty, history, and a wealth of culture and heritage are just the tip of the iceberg. Corfu is a crown jewel among the Greek islands: elegant, charming and effortlessly sophisticated. Building on this, Discover Greek Culture offers expertly crafted tours for discerning travelers: private and fully customizable to meet your specifications, offering exclusive access opportunities, and guaranteeing extraordinary experiences. Contact us to find out how we can bring your dream tour to life.

It’s time to discover the magic of Corfu!!

Few destinations evoke quintessential images of an ideal autumn break more than Crete — and rightfully so. Greece’s largest island — and the fifth largest in the Mediterranean after Sicily, Sardinia, Cyprus and Corsica — is situated at the southernmost reaches of the Aegean Sea, with the Libyan Sea and Egypt to its south. It boasts some of the best beaches and top resorts in Greece and the entire Mediterranean, but it’s also home to the Minoan Civilization, one of the earliest and most influential civilizations on the planet.

Named for King Minos — who according to myth ordered Daedalus to build the infamous Labyrinth of Knossos to house the half-bull half-man Minotaur — the Minoan Civilization was an Aegean Bronze Age civilization that flourished throughout Crete and other Aegean islands from about 2600 to 1100 BCE. Today, following over a century of excavations, Crete is peppered with world-class Minoan to visit, and the majority of them just happen to be located a stone’s throw from one or more of the island’s gorgeous beaches.

Want to combine sun, sea and fabulous history? Read on to discover our top five Minoan destinations to infuse your autumn break  holiday with a touch of history and culture.

You can’t visit Crete without visiting the renowned Palace of Knossos, arguably one of the world’s most important ancient monuments. The largest, and most important Minoan site, on the island, the Palace was unearthed in the early 20th century, bringing to light a fabulous palace complex, with luxurious quarters, a majestic throne room and a number of extraordinary, elegant frescoes including the famed Bull Leapers, the Dolphins, the Prince of the Lilies, and the Ladies in Blue.

Make sure to visit the Archaeological Museum of Heraklion too, and while you’re in the city, make time to stroll the beachfront, visit the Venetian Fortress and view the city’s impressive cathedrals. The long sandy beaches of Amoudara and Karteros are just a short drive away and offer a full range of amenities and plenty of seafood tavernas to choose from.

About an hour south of Heraklion, near the island’s south coast, is the Palace of Phaistos. This is the second most important Minoan site on the island. It is also where the famous and rather mysterious Disc of Phaistos was discovered: a 4,000-year-old clay disc covered in spirals of enigmatic writing that has perplexed archaeologists for decades.

Just east of Heraklion, Malia is home to the island’s third most important Minoan site, the Minoan Palace of Malia. But this is a clear case of Come for the culture, stay for the nightlife. Malia is one of Crete’s best-known nightlife hotspots and is a particularly popular destination with holidaymakers looking for a destination where the fun continues well into the small hours of the night. In addition to the Palace of Malia, make sure to visit the nearby village of Krasi, famous for its ancient giant plane trees that adorn the village square.

Mochlos is a tiny islet located in Mirabello Bay near the town of Agios Nikolaos. Evidence suggests that before becoming an island, Mochlos was actually connected to the mainland by a narrow strip of land — and this would have been the case during the Minoan period. A Minoan settlement was excavated on the island during the early 20th century, and the area still hosts regular excavation projects by Greek and international teams.

Mochlos can be reached by boat from the popular seaside town of Agios Nikolaos. While in the area, take the opportunity to see the gorgeous Lake Vouliagmeni, visit Istros beach for a swim, enjoy a stroll along Agios Nikolaos’ promenade and tuck into some tasty seafood at one of its beachfront tavernas. Craving a bit more local flavor? Visit the nearby Cretan Olive Oil Farm and Votania Herb Farm for a taste of local culinary traditions.

Situated on the island’s east coast, the archaeological site of Zakros is ideally combined with a day trip to the Crete’s easternmost reaches. Visit the ruins of the Minoan palace, head north to explore the magnificent palm forest of Vai — the beach is amazing too! — and continue your trip to visit the renowned 15th-century Toplou Monastery, which regularly attracts visitors from all corners of the Earth. Toplou is also home to some of Crete’s best vineyards, so make sure to make time for a winery tour and wine tasting.

Not sure where to start or how to combine it all? With years of expertise as one of Greece’s top cultural tour operators, Discover Greek Culture has a range of itineraries to choose from, all completely customizable to your specifications. All our tours are led by experienced tour guides and can be tailored to your wishes. What’s more, our specialty is providing unique cultural experiences and exclusive access to off-the-beaten path sites and locations. Can you think of a better way to treat yourself to the perfect holiday on Crete?