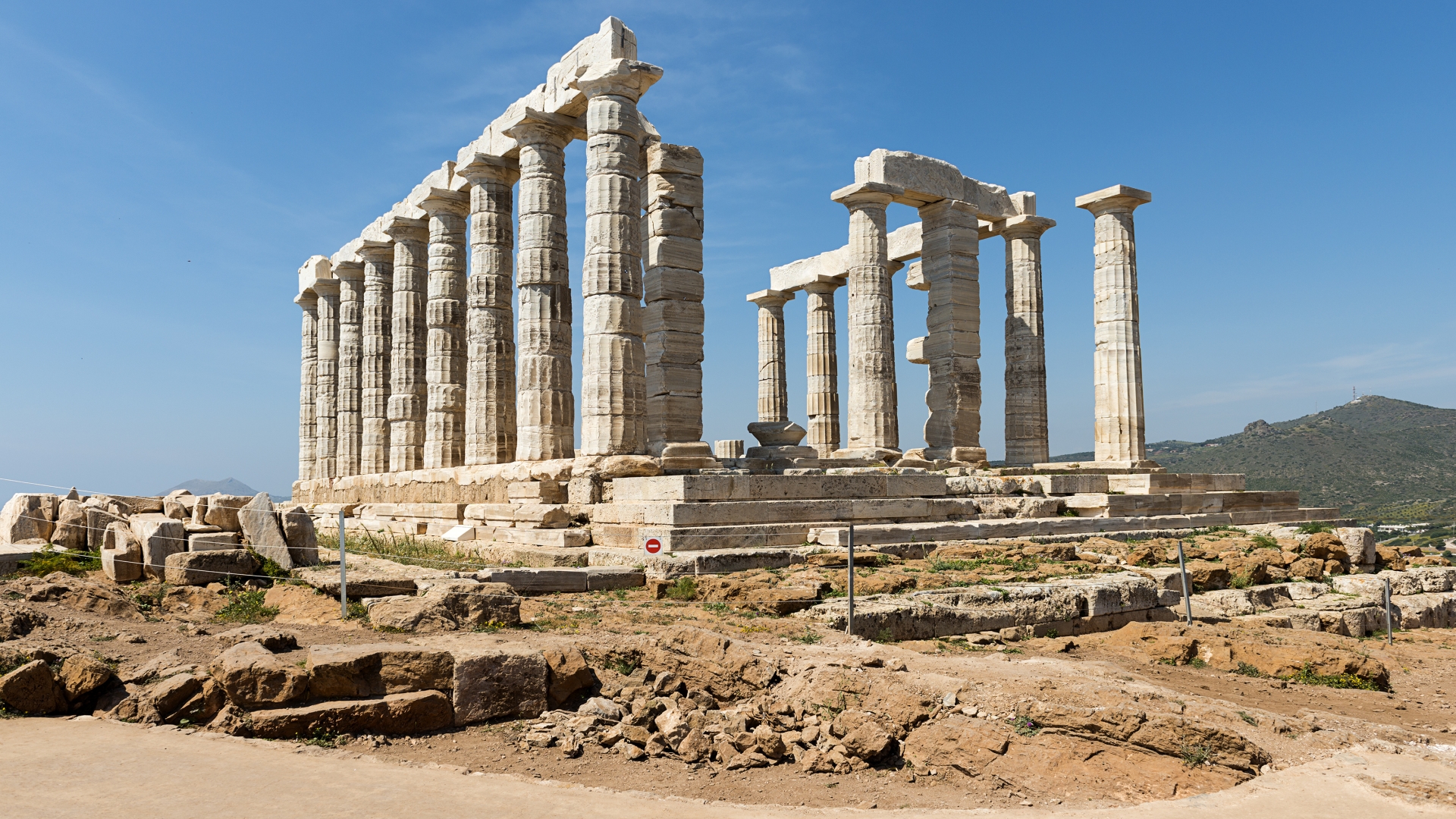 Perched atop the craggy promontory of Cape Sounio and overlooking the sparkling Aegean Sea, the famed Temple of Poseidon has inspired the popular imagination for thousands of years. The temple—and the Cape itself—is the stuff of legend and poetry and has fascinated artists and scholars throughout the ages.

Cape Sounio features prominently in the myth about how the Aegean Sea got its name. The story goes that Theseus, son of King Aegeus, traveled to Crete to face the Minotaur in his labyrinth, setting off on a ship with black sails. He promised his father that if he succeeded and survived, he would hoist white sails for his return. With the help of Ariadne, and the ball of string she gifted him, Theseus beat the beast and escaped the labyrinth victorious. Yet in the tumult of his return, Theseus forgot his promise. Standing upon Cape Sounio, King Aegeus saw the black sails returning and, thinking his son dead, threw himself into the sea, to his death. And so the sea became known as the Aegean Sea.

The Temple of Poseidon was built in the 5th century BCE, during the ascendancy of the Athenian statesman Pericles, and stands on the site of an earlier, Archaic-period temple. Over the centuries, it has attracted some of the brightest minds of Europe’s literary and academic world, and its praises have been sung by the likes of Sir George Wheler, William Falconer, Lord Byron and Martin Heidegger.

Now, Discover Greek Culture’s unique new Cape Sounio tour—available as a day trip from Athens—gives you the opportunity to step into the shoes of great thinkers who visited this glorious landmark and were inspired to write poetry, memoirs and treatises on the meaning of beauty and being.

Led by expert tour guides, the Theseus Paradox Sounio tour combines fabulous sightseeing with an introduction to ancient Greek mythology and philosophy, exploring the interplay between the two and grounding them in the spectacular Mediterranean landscapes that gave birth to them.

Staying close to the myth about Aegeus and Theseus, the tour uses the story of Theseus’s ship to introduce you to some intriguing ideas of Greek philosophy: According to Plutarch’s Life of Theseus, the ship Theseus returned in was preserved by Athenians as a memorial for centuries. “They took away the old planks as they decayed, putting in new and stronger timber in their place,” the philosopher wrote. But when all the original parts have been replaced by new ones, is this still the original ship?

The Theseus Paradox is a thought experiment in the metaphysics of identity that invites you to question concepts like change, memory and personal identity, and to participate in an exciting intellectual discussion about how we perceive ourselves and human nature. Your setting? The magnificent marble columns of the Temple of Poseidon, the glittering Aegean Sea, and the endless blue canopy of the Greek heavens.

This is a tour for lovers of Greek culture and philosophy, for inquisitive minds and cerebral adventurers who want to be treated to a truly extraordinary experience. More than a great tour to one of the best places to visit in Greece, the Theseus Paradox Sounio tour is an eclectic twist on one of Greece’s top landmarks.